Nowadays, wireless headsets have become ubiquitous. The fact that we’re spoilt with choices is great, but having to choose our best cans from a plethora of options can be a chore as we’ve to be extra selective.

On the market, we’ve various wireless headphone designs, including on-ear, over-ear, in-ear, around-the-neck, and others. Each of these styles works better for some uses more than others. The LG TONE Platinum is among the best around-the-neck headphones out there.

The audio appliance is full-featured, offering you lots of goodies. Let’s walk you through them! 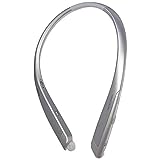 LG adopts a unique approach to its Bluetooth headphones. While other makers often bridge earpieces with a slender cable, the LG TONE’s design instead makes the headset a one-piece circular band.

With this approach, the audio device will rest around the neck, and through very thin, retractable wires, the earpieces will extend from the open ends. The whole band seems like one material. However, there’s a section on the rear, which is rubbery and flexible.

This lets the band open up to be worn and adjust shape for various neck sizes.

The Platinum variant of the LG TONE can be regarded as a higher-end, premium version. The bulk of the chassis is built from smooth, hard plastic. However, brushed metal accents are lined on the open ends — that have a nice shiny chamfer — and also around the sides. With this touch, the headphones have an elegant feel.

Along the metal lining lies an array of controls. We’ve on the right side a play/pause button and switch to skip to the previous/next tracks. There’s the charging port nearby, which is protected by a flap and accepts a microUSB connector.

When you turn to the left, you’ll see a call answer/end/reject button and a volume switch. (The headphones feature a mic for answering calls.)

The inner lining of the neckband is textured beautifully, a testament to LG’s attention to detail. We’ve the same button on the 2 sides, which are used for retracting the earpieces.

We can’t say with certainty why LG chose not to use the same mechanism as the one we’ve on the TONE Active, in which you pull on the earpieces gently when fully extended, and they automatically retract. We feel that method is better, though pressing a button isn’t that much of a hassle.

The on/off switch for the headphones sits close to the right side. One major benefit of LG’s wireless headphone design is, the earpieces can have a compact shape as they won’t need to carry all the wireless-enabling electronics.

Their shape looks quite simple, and the housing also contains a decent metal touch. The headphones are also super-light.

LG put a lot of thought into designing the fit of the TONE Platinum as it contours naturally around your neck. Thanks to its lightweight, you’ll barely feel like anything is hanging around your neck.

Comfort won’t constitute a concern of any kind. With the small, capsule design of the earpieces, they slip into your ear canal conveniently and fit snugly.

Once worn, the headset stays in place even when you’re moving about. Since their cables are very thin, you’ll barely notice them. These headphones extend out by just over 9 inches, ensuring that there’s plenty of slack.

Having said that, you may find that they rub on the unit or your face when you’re on the go and pick up microphonics noise.

It’s extremely easy to pair the audio appliance for the first time. Once you switch on the headset, it automatically enters the discoverable mode.

On your smartphone (or other mobile devices), open the Bluetooth settings, and choose the option that reads, “TONE Platinum”. Then, you’ll hear a pleasant voice that lets you know the status of the headphones (which will show that it’s paired and all set).

You might need to take some time to learn how to use the functions on the headset. In particular, you’ll need to remember the specific direction of the buttons that stands for previous/next track or volume down/up.

Another cool thing about the control buttons is that holding the switches gives you access to some additional actions. When you hold the track button down, this fast forwards or rewinds through the music track. But when you hold the volume switch down, this helps you move through the available volume range faster. Holding the play/pause button stops the song.

The TONE Platinum also has an equalizer: Simply double-press the play/pause button to change between treble boost, bass boost, or neutral settings. To activate your smartphone’s voice command, hit the call button (when a call isn’t in progress).

If your mobile device runs Android, it will invoke Google Now. If the phone is iOS-powered, it activates Siri. Using LG’s inbuilt a vibration motor, the headphones will vibrate when you’ve a call.

Press the call button to either answer or end a phone call. Also, press and hold it for a second to turn on Call Waiting. Press & hold the call button for 2secs to reject an incoming call.

While Bluetooth may not be the best method for enjoying listening to music for audiophiles, LG seeks to take care of that using certain enhancements, such as Qualcomm’s aptX codec for 24-bit music support, always-on noise canceling as well as the Harman Kardon sound stamp of approval.

It does work decently, eliminating the bulk of the noise pollution that emanates from the outside world, particularly when you’re listening to music on a medium level.

Lows, Mids, and Highs: As for the lows, you’ll find the bass in the headset rich. Also, it isn’t too muddy. That’s cool because it’s that aspect of sound you’ll feel the most.

Mids seem to be the most balanced part of the LG TONE Platinum. That’s also great as it’s the part of the frequency range in which you’ll find the vocals from all your favorite songs.

The highs often feel slightly muffled. So, if you want greater clarity in the upper frequencies, these headphones may not be the best for you.

The audio device could work best with the hip-hop genre. The faint higher end may not offer the perfect music listening experience in genres such as classical or certain EDM.

The Bluetooth range is pegged at around 10m (33ft). The battery offers you 10 hours of music playback based on how high or low the volume is (more on that shortly). Also, this model has enhanced audio capability.

It has aptX HD, one of Qualcomm’s newest Bluetooth streaming standards. With this codec, you can enjoy HiFi playback over Bluetooth with sound quality at 24 bits. And that’s quite remarkable.

Concerning the additional functions mentioned earlier, if your phone runs iOS, you can get the LG “Talk and Tone” app. The app is also available for Android smartphones. This software lets you assign some shortcuts to various controls on your headphones.

For instance, you can hold to go back to the previous song, but the headset will instead read back your most recent message. The audio appliance will also vibrate when something new occurs on your mobile device. Through the mobile app, you’ll be able to filter out the specific apps you prefer to receive an alert about.

Further, call quality on the headphones is commendable as a result of the dual mics on the ends of both arms.

LG says the TONE Platinum will provide you with a battery life of around 10 hours. And we found that claim to be correct in our tests.

The headset was primarily utilized at the gym and for casual listening. They could last 3 – 5 days between charges.

Are you an above-average user? If so, you’ll need to charge them between uses. Fortunately, charging time is just somewhere in the region of 90 minutes and 2 hours.

The LG TONE Platinum is among the best around-the-neck headphones on the market. It has an over-the-neck design, which means the headset will rest around the neck. Fortunately, it’s lightweight, so you’ll barely feel you’ve anything hanging around your neck.

Also, the earpieces will extend from the open ends through very thin, retractable wires. The model comes with many features, including inbuilt equalizer, vibration, high sound quality, great voice clarity, call functions. The TONE Platinum has a battery life of around 10 hours. When used at the gym and for casual listening, they could last between 3 to 5 days between charges.

How to Wear Glasses with Headphones

Why you need good headphones when streaming on Music Platforms