Some years back, Bragi pulled the plug on the production of headphones with smart features in a move to cut costs. Then, the maker forayed into the design of the second generation of 100% wireless earbuds, which is dubbed “The Dash”.

These true wireless earbuds, Bragi Dash and Bradi Headphones, offer you comfort, reliability, rich sound quality, noise cancellation, and other exciting features. There are some differences in the features and specs of both audio devices from the German company. This post pits Bragi Dash against Bragi Headphones to see what the improvements are. Let’s learn more!

A Sneak Peek into Bragi Dash vs Bragi Headphones

What Is Bragi The Dash?

Technically, we should be using the term, Bragi The Dash, for these earbuds. But we feel the majority of users are more familiar with calling them Bragi Dash.

Bragi Dash is the first-generation hearables from the German maker. A re-engineered variant of the original, which is the second generation of hearables, is referred to as Bragi Dash Pro.

Just like Samsung’s Gear IconX or Apple’s AirPods, they’re a set of true wireless earbuds, which means no cables are around or in between them at all.

The model works smoothly with Android smartphones and iPhones, allowing you to stream music from them, pick phone calls, and track these sports, cycling, running, and swimming. Also, The Dash functions as an MP3 player, which helps you load up the music, obviating the need to take your mobile phone along when going out.

The Dash Pro has 2 different versions: We’ve the regular Dash Pro that retails at $329, offering all the smart features an in-ear monitor, and The Dash Pro Tailored by Starkey that is sold for $599.

The primary difference, which accounts for that significant gap in price, is that the latter variant of the Dash Pro enables you to get an injection mold of your ears, so the earbuds fit flawlessly.

If you prefer something a little more basic, the company offers you Bragi The Headphone that is much cheaper than the Dash.

What Is Bragi The Headphone? 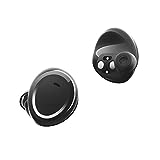 Just like The Dash, Bragi Headphones are 100% wireless, comprising a pair of wireless earbuds, along with a charging case. They’re a lot more affordable than The Dash, with a price tag of $149.

But it lacks the activity tracking and live translation options of its costlier siblings. Apart from that, the Headphone doesn’t also have on-board MP3 player and waterproofing.

It’s all plastic. Also, its included charging case is built with plastic, and not metal. There’s no inbuilt battery for recharging the earphones, and that could be a bit of an issue.

Focusing on the positives, Bragi The Headphone delivers a superb performance, with both earbuds maintaining a steady connection. They can be paired and re-paired with a smartphone smoothly. Their design is lightweight, and they’ll fit into the ears securely and stay there.

Additionally, the integrated mic works spectacularly well for making and taking phone calls (in quieter environments, at least). The higher-end Dash features upgradeable firmware and touch controls, along with an app for controlling an array of advanced functions.

However, the Headphone doesn’t have an app. Also, their firmware isn’t the upgradeable type.

Unlike the nearly automatic pairing process of the majority of Bluetooth earphones, pairing Bragi The Dash is a bit more involved. On the Bluetooth pairing menu, you’ll see different versions of the pair. You’ll need to follow voice prompts and press the earpieces to complete the pairing process successfully.

Since you’re only required to pair once, it isn’t a big drawback. However, the pairing option isn’t perfect.

But after the initial pairing is done, the earpieces connect automatically when you wear them in the ears, pause the music you’re listening to when you take them off, and enter sleep mode after staying idle for an extended period.

The setup for The Headphone is also slightly tricky like The Dash. However, once you how it’s done, it becomes straightforward.

To pair with another device, hold the power key for 3secs. Then, select “Bragi HP” from the Bluetooth settings of your mobile device.

The part you may find hard is switching them on later without inadvertently setting them to re-pair, coupled with a one-second hold. The trick involves waiting for a solid LED to show up instead and pulling the pressure immediately. While this works, a switch would have been better.

While their design is thinner and lighter, the looks of these earbuds share many similarities with The Dash. They’re carved in black plastic, featuring vented mic slots, enabling you to hear the world around you.

This option is known as Transparency Mode, and it’s among the handful of lifestyle features, which are retained in Bragi The Dash.

To enable Transparency Mode — and all other options — you’ll have to get used to the awkward 3-key control center that’s on the right earpiece.

This is designed in such a way as to mimic the 3-button system on the majority of in-line headphone mics, featuring a plus key & minus key used to adjust the volume, and a power/multi-function key.

But this key doesn’t function as smoothly.

The in-ear design of The Dash nearly looks too large to stay in place firmly without using a cable. However, it does, even when you’re engaging in a vigorous exercise.

It’s important to take some time to determine the specific ear tip size that’s most suitable for you. It’s sold in white or black.

The earbuds are controlled by taps & swipes. Also, they can be controlled by holding your finger against the earpiece surface. Other actions, like taking an incoming call or rejecting it, can be achieved by merely shaking or nodding your head.

Further, the control process works smoothly. However, it could take a while to get used to what each control is meant for and which ear to make use of. The left ear is mainly utilized for controlling fitness tracking.

But the right ear is used for adjusting audio playback, changing volume (that functions independently of, and not alongside, the master volume level of your device), and monitoring navigation.

Bragi The Dash makes use of an audio transparency mode, which you can control in the mobile app, or by utilizing swipes on the left earpiece. The ambient microphones enable you to hear the room around you in this mode.

In the ambient audio, you might notice an ever-so-slight delay. Thus, if you’re tapping on a keyboard, you get to hear the initial strike (which could be muffled) and the ambient microphone’s signal some milliseconds later.

Furthermore, intelligibility via the microphone on phone calls is more robust than you might anticipate for a device without any cable that you can use to put the microphone closer to the mouth.

Bragi Dash delivers a high-frequency in-ear hiss, not really annoying or loud, but no doubt audible. This is identical to the sound that noise-canceling headphones typically make. However, the Dash doesn’t have active noise cancellation circuitry.

When the monitor microphones are off, the earpieces passively reduce a modest amount of ambient room sound.

When The Dash is on tracks that have intense sub-bass content, such as “Silent Shout,” by The Knife, it creates powerful low-frequency response. And its drivers don’t distort at top, unhealthy listening levels.

When you tune it to more reasonable levels, you’ll find that the bass response is still quite strong. However, it isn’t wildly exaggerated since the earbuds don’t deliver deep lows to the extent that a lot of exercise-centric earphones do.

In “Drover” by Bill Callahan, which is a track that doesn’t have much deep bass in the mix, we can get a better idea of the overall sound signature of these earbuds.

Fortunately, The Dash doesn’t create deep bass, where such doesn’t exist, as the drums on this track sound nearly flat in comparison with the way they often do on heavily bass-boosted earphones.

The treble response is unique with every aspect having a very crisp and clear sheen. However, the high-mids and highs typically seem overly sculpted or tweaked. Also, some sculpting can be observed in the low-mids that sound boosted in spots and give Callahan’s baritone vocals additional richness.

This results in a distortion-free and clear sound signature. However, it’s quite obvious that Bragi The Dash offers nothing close to a flat response.

Some quirks in Bragi The Headphone, in addition to its lack of a battery case, become significantly more pardonable immediately you actually hear the earbuds. They do sound fantastic for a wireless unit carrying a $150 price tag.

Not only is the audio full but also pulpy in the bass & lower midrange. Apart from that, it’s also clear and comparatively well-detailed in the middle, and capable (though it could seem slightly rolled off in the upper register to bring a smooth, engaging sound).

As for the soundstage, this is also extremely well separated, though slightly compact. This lets you hear clearly defined instrumental timbres, as well as stereo placement, even when your earbuds are putting out a menagerie of sounds.

Unlike what we’ve in several other true wireless earbuds, the stereo image is robust and clearly defined. Overall, the sound signature of The Headphone is extremely accessible.

If they’re forced to bring about some quibbles, we’ll be propelled to that treble region that just doesn’t provide the sparkle and airy presence we get in more expensive buds. Additionally, you could find the upper midrange does sound slightly strident and buzzy occasionally, mainly while rendering lighter recordings of electric guitar and piano.

For example, “Sorrow” by Pink Floyd has distorted electric guitars providing more crunchy buzz-saw tone compared with the more vibrant resonance that we’re familiar with. In the same vein, piano in lighter tracks such as “She Comes in Colors” by The Stones shows a bit of electronic keyboard clarity, as it sounds lighter and thinner than we’re used to.

But well-produced recordings, such as “Martha My Dear“ by The Beatles and “The Calculation” by Regina Spektor, do recreate piano that comes out with rich and earthy resonance. However, lower instruments, such as like kick drums, bass guitar, and lower brass, give out warm flavors producing that familiar sonic itch in all the right places.

Though bass heads could ask for a bit more authority, we did find the balance utilized here amazing, which helps keep everything in check while delivering some power and vibrancy down low, when needed.

As regards call quality, The Dash isn’t so great. However, they manage to do a decent job, and that’s more than we can state for Bragi The Dash.

Final Verdict — Bragi The Dash or Bragi The Headphone?

It didn’t take long for the German-headquarter maker to release the second generation Dash, which is a very common pair of true wireless earbuds that hit the market on the heels of a successful Kickstarter program in 2014. While Bragi The Headphone doesn’t have smart features, their reliable connection, secure fit, impeccable sound quality and longer battery life make them the best choice at an affordable price.

However, if you want a higher-end model with lots of smart features, you can opt for the costlier Dash versions.